Before having my Phakic Intraocular implants with Toric lenses, I was short sighted with very high astigmatism (-4.0 cylinder in both eyes).

I was happy wearing contacts until my optometrist told me that they were drying out my eyes too much and recommended that I only used them for social use.

I found that as my job was purely computer based, the long hours staring at a computer screen and the switching between glasses and contacts gave me so many migraines!

A friend of my dad’s recommended Centre for Sight and Mr Sheraz Daya to us.

I originally wanted to get LASIK laser eye surgery but it turned out that my corneas were too thin so I wasn’t a good candidate for LASIK. I was really disappointed and sad to hear that I couldn’t get LASIK as the migraines were really getting me down.

Then Mr Daya introduced me to the Phakic IOL’s which I had never heard of before. It made me so unbelievably happy to think that I could still have vision correction surgery despite all my eye complications!

I tried not to think of the procedure or look at videos beforehand, so I wouldn’t get nervous. But my nerves kicked in when I was actually in the waiting room being prepared for the eye surgery! The nurses and technicians were all very friendly and comforting and put me at ease.

There were some scary bits to the procedure (having to have stitches done) but Mr Daya did this so rapidly, that what seemed like a complication to me, was so routine to him. The actual operation itself took around 10-15 minutes and as I was sedated; I don’t really remember too much of the operation. The longest part about the day is all the various eye drops you get put in your eye.

My vision has been fantastic! I was so impressed by the whole Centre for Sight team who made me feel at ease especially Ms Marcela Espinosa, Dr Lam, the nurses and technicians and of course, above all, Mr Sheraz Daya.

I was so impressed by how quickly and efficiently he performed the surgery and even when I had to have some stitches done… how quickly he did that. I can’t thank him enough for his skilful work and for giving me the gift of sight without glasses!

I am so happy I chose Centre for Sight – the staff have been wonderful and Mr Daya is such a fantastic surgeon. He performed the operation so quickly and was so professional, I respect him a lot.

I definitely wouldn’t hesitate to recommend Centre for Sight! In fact I have already been recommending people to Centre for Sight and telling them how fantastic Mr Daya and the whole team were.

The amazing thing is that as soon as you are out of the operating theatre, you can see perfect vision instantly! It is a pretty fantastic feeling. I now have 20/20 vision!

It is a dream come true to be able to live a normal life without being affected by pesky headaches and migraines. It is also so liberating to be able to not have to put on a pair of glasses every day and to wake up and to actually be able to see!

Next morning following surgery, Tammy shared her experience on Instagram. 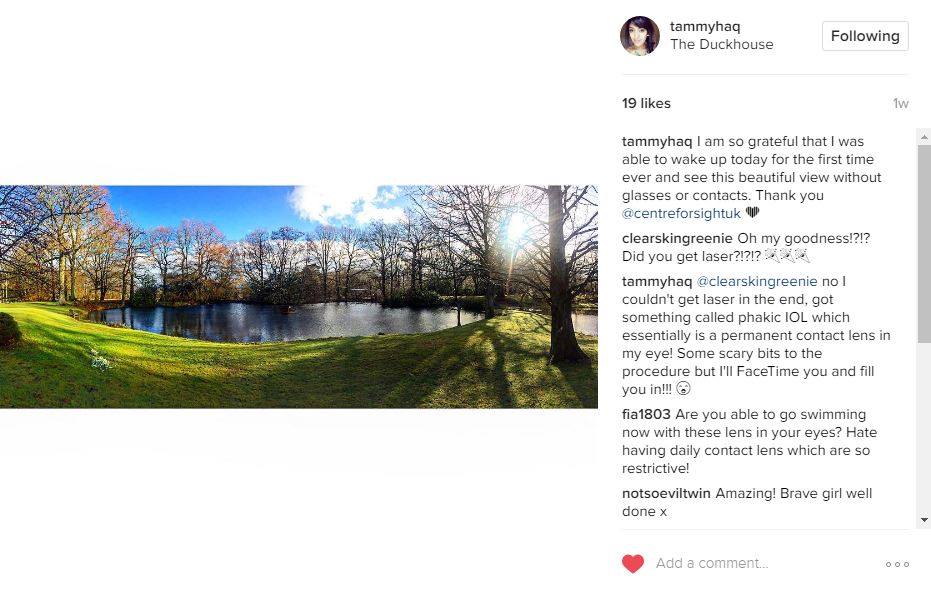